​​TikTok Trends for Video Marketing For 2022​

TikTok, a social networking application that allows users to share short films with others, has developed into a leading player in the video marketing industry. TikTok is a terrific medium for reaching your audience, with millions of active monthly viewers and rising consumer demand for shorter content. There are no fees related to uploading content on TikTok because it is also free to publish!

If you want to stay ahead of the curve, be sure to read our blog post, which will walk you through the latest TikTok trends. We’ve got all of it outlined herein, from how to use the app to what type of material should be submitted to how businesses are embracing it for advertising.

TikTok will continue to expand at the cost of other platforms and has surpassed Twitter, telegram, Reddit, Pinterest, and Snapchat in monthly active users, which have lately seen their usage rates drop. Brands will connect with consumers on the platform with tailored content, allowing them to connect with them while also giving value. TikTok’s parent company (Bytendance) reportedly reached a valuation of $280 billion in August 2021.

The rise in the popularity of TikTok has been dramatic. It is now ranked as one of the top 10 social media apps on Android and iOS devices. One reason for this may be that people are looking for a way to share their lives with others without being filtered or edited by someone else before they post it online. TikTok has been downloaded 3 billion times and was the most downloaded non-game app in the first 6 months of 2021, hitting 383 million installs from January to June 2021 alone. Marketers have an opportunity to reach new customers through advertising opportunities available on these platforms. Contact us today if you’re interested in learning more about ways your business can use video marketing strategies like TikTok ads!

The popularity of TikTok videos has made video marketing in 2022 may possibly be overlooked. It’s also used as a forum for pop culture social criticism. So, if you want to capitalize in on this trend, what type of material should you be producing? Branded takeover videos, in which marketers promote their products through influencers’ channels through sponsored uploads, are one approach to sell your brand or product on TikTok. Other options include sharing behind-the-scenes footage from events, live streaming before-and-after makeovers, seminars, and more.

TikTok reigned dominant in 2021, and we believe that consumers will purchase more on, in, and via the video-sharing app, as well as through livestreams. As TikTok is “one of the fastest-growing platforms,” “you should expect to see ad spend transfer to TikTok in 2022 – either from other social channels or conventional media.”

Since its launch in 2016, TikTok has grown in prominence, with 1 billion monthly active users. It’s more than just a fun video app; it’s also a powerful marketing tool for companies trying to promote their brand on social media. By 2022, the following trends may assist or hinder Tik-Tok’s growth.

Here’s a look at the trends that will dominate TikTok video marketing in 2022:

1. In 2022, numerous businesses and influencers will use TikTok for marketing.

Because TikTok’s popularity has exploded so quickly, many marketers are still unfamiliar with the site. This is beginning to change, especially now that TikTok has an official advertising network. As a result, expect to see a significant growth in the number of businesses using TikTok to promote this year, specifically ones aimed at Generation Z or Millennials.

Similarly, as the number of TikTok users has grown, so has the number of influencers on the network. TikTok was formerly recognized for individuals uploading their own renditions of music videos. People are now uploading a far wider spectrum of films to TikTok, allowing more people to be acknowledged as experts in other subjects. In addition, a number of influencers on other platforms have established a TikTok presence in order to increase their visibility. According to a Tribe Dynamics poll, 35% of influencers claim they’ve started using TikTok more regularly in the last year.

The growth in influencers will also assist to expand the number of businesses using the platform to sell their products. Many businesses collaborate with influencers to promote their products to their large followings. TikTok uses a sophisticated algorithm to offer audiences with relevant material. Brands will be able to contact their intended audience more easily through sponsored advertisements or influencer marketing as a result of this.

2. TikTok Will Keep its Popularity, even as the World Opens Up

The number of people downloading and spending time on TikTok was already increasing before COVID, but the epidemic greatly increased the number of people installing and spending time on the app. People had considerably more free time as a result of the numerous lockdowns throughout the world, and they needed to fill it with something to do while staying at home, and for many, watching and producing TikTok videos filled that need.

It is beginning to look like Covid’s here to stay now, and much of the world has opened up, albeit often requiring vaccinations and Covid passports. But that hasn’t led to people abandoning TikTok. Instead, it has just meant that you now see more TikTok videos filmed outside the home environment as people start to move about more.

This trend is expected to continue in 2022, as individuals use TikTok to broadcast their ever-expanding lifestyles. And, of course, music fans will continue to post massive amounts of lip-synching videos, as they have in the past.

3. TikTok Will Replace Television for More of Generation Z

TikTok has always piqued the interest of Generation Z. If you listened to a lot of teenage talks, you’d hear them talking about the app. Many people use the word “to TikTok” as a verb to describe how much time and effort they put into the app.

According to Qustodio, worldwide TikTok users aged 4 to 15 spent approximately 75 minutes per day on the app in 2020, up from 38 minutes per day in 2019. In 2020, US teenagers would spend an average of 87 minutes per day on TikTok, nearly doubling the 44 minutes spent in 2019. TikTok has surpassed Instagram as the most popular social app for Generation Z throughout the world (which has now dropped to third position after Facebook).

Generation Z owns 98 percent of smartphones, and most of them have been using them since they were kids. While earlier generations still watch television to pass the time, Generation Z is less interested in it, especially when it comes to planned programming. Generation Alpha, today’s youth, takes this tendency even farther.

According to a poll conducted by IBM, 75% of Generation Z believe their mobile/smartphone to be their preferred device. Only 3% chose an interactive/Smart television, with none thinking a regular television to be particularly valuable. When asked how they spent the majority of their time outside of school or job, the most popular response was to go online (74% ). At home, 87 percent claim to have high-speed internet connection.

TikTok tends to encourage users to create serial content. Each episode may be thought of as a (very) short television episode. Some TikTokers create extended episodes comprised of several TikTok videos.

4. More Celebrities Will Use TikTok Trends to Reach Their Young Fans

Celebrities are now flocking to TikTok after a long wait. Of course, several of the younger celebrities had TikTok accounts long before they became famous.

There are 132 celebrities listed on Cosmopolitan’s site, and they aren’t all from Generation Z. Arnold Schwarzenegger (former Mr. Olympia, Conan the Barbarian, Terminator, and California Governor) has a TikTok profile.

Similarly, Coldplay, who has a large number of 30-plus admirers, has 2.5 million TikTok followers, while 74-year-old Elton John has 2 million.

5. Hashtag #memes Will Increase in Popularity

Memes are getting more popular on all social media platforms, especially among Millennials and Generation Z. Memes are still popular on TikTok, despite the fact that video is a less apparent medium for them than still photographs. TikTok filmmakers make short videos showcasing their favourite memes, and the more people who see these movies on TikTok, the more people are encouraged to make their own.

6. Branded Hashtag Challenges Will Become Even More Popular on TikTok

Since Jimmy Fallon established the #TumbleWeedChallenge on an episode of his program, TikTok has been flooded with hashtag challenges. People were challenged to roll around on the ground like tumbleweeds while listening to classic western music in the background.

Brands are paying closer attention to hashtag challenges’ success and building their own that would appeal to their target demographic. A branded hashtag challenge is when a corporation creates a hashtag and encourages its followers to make films that are connected to the hashtag and maybe their product. TikTok has aided this by making it simple for businesses to promote their hashtag challenges but at a high cost.

It’s crucial to make your branded hashtag challenge enjoyable for your audience. You wouldn’t want it to appear too clear as a marketing illustration.

Hashtag Challenge Plus on TikTok allows marketers to create a sponsored hashtag challenge. TikTok members upload a video of oneself using a certain product or engaging in another activity related to a marketing campaign. The Hashtag Challenge Plus includes a shopping element to the hashtag, which sets it apart from other hashtag challenges. The app offers a tab in which the user may buy the merchandise directly from TikTok.

TikTok has also declared a relationship with Shopify, which will make it simpler for merchants on Shopify to access TikTok’s youthful audience. After installing new TikTok channel app, Shopify companies can develop, run, and optimize their TikTok marketing campaigns straight from their Shopify dashboard. In addition, retailers may transform their items into In-Feed video advertising by creating native, shareable content.

8. Focus on More Behind the Scenes Videos

Anticipate seeing several companies use their employees as that of the public image of their brands as we have move forwarded into 2022.

We can’t forecast everything, so don’t take this list as a firm rule. The most critical thing about a digital marketing approach is to always be open to learning, adapting, and changing. Trends come and go at a breakneck pace. You could come across one that piques your interest at any time; just make sure you jump on it as soon as possible! 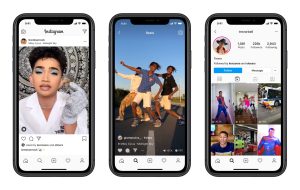 Since social media platforms are continually changing, they will always be immensely popular. Reels are a quick and easy method to provide information, teach, motivate, connect, and engage with others. The tips listed above will place your brand in the best possible position to expand your platform followers and become one of the best in the business. So, get started with Instagram Reels right now! 5 Futuristic Lead Generation Practices For 2022 And Beyond

If you don’t want to dump the productive hours of your sales team into making 8 cold calls and 5 follow-up calls for lead generation, Metaverse Explained: What is it, and how it works?

A lot of work exists between where we’re at now and where we see the metaverse. The whole world is thrilled though, and we hope to see you along with us on the journey! With 2022 just around the corner, graphic design trends are slowly and surely picking themselves up. Designers have started creating sites art and interactive projects.

Made with ❤️ in Canada